1978  Rafe does his first improv show as a guest with Flash Family and is soon made a member.

1987  Rafe is asked to join BATS Improv as a Company Player.

1988  Rafe invites Stephen, via telephone message, to take his private class. Stephen knows of Rafe and is honored to accept. Tim sees his first BATS Improv show featuring Rafe and Regina Saisi. Tim joins Rafe’s beginning improv class at BATS Improv, and then his private class, where he meets Stephen.

1989  February: Rafe forms Improv Theater, asks Stephen to be a founding member. April: Tim begins making guest appearances for Improv Theater, directed by Rafe. For the first time Rafe, Stephen, and Tim perform together, with others, in an Improv Theater show.

1996  Stephen and Rafe are founding members of True Fiction Magazine (TFM), a spin-off of Pulp Playhouse (1988). TFM is popular, utilizing an exciting story-digression format. Because TFM already has four men, Tim is disappointed that he does not get to work with Stephen and Rafe in a challenging format.

“Well, start a group with just the three of us.” Rafe Chase 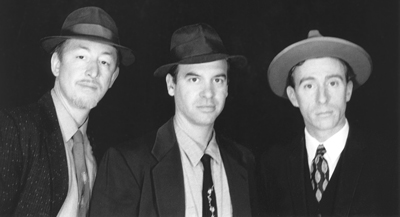 the group  3 FOR ALL

“I distinctly remember Tim sitting in the audience during some True Fiction shows and thinking ‘He should be up here with us. We should try something different where the three of us could work together,’ I never considered that it would be
just the three of us. That seemed nuts.”  Stephen Kearin

“Stephen and I had spoken casually about maybe starting a
2-person group at some point, but nothing came of that. And because we all enjoyed working together so much, it seemed
that a 3-person group was the way to go.”  Tim Orr

In 1996, San Francisco improvisers RAFE CHASE, STEPHEN KEARIN & TIM ORR formed an ensemble of three to pursue a distinctive brand of high-stakes improv. They called themselves 3 FOR ALL—a perfect reference to the unique
3-person cast and the absolute spontaneity of the format. 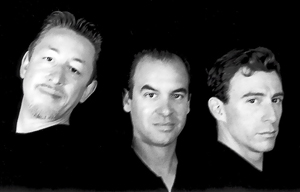 TIM: At that time I had never seen or heard of a group that small. In some ways it was a perfect number because there’s  three dyads [Rafe and Stephen, Stephen and Tim, Tim and Rafe], which created numerous possibilities.

RAFE: It was frightening, but exciting. More so than anything I had ever done as an improviser up to that point. You always had to be on your toes…ready to go. We had no idea if we could pull off a 3-person long-form until we tried it that first day in 1997. It was demanding, but we did it. It also made us realize that we would have to develop a new skill: character switching.

STEPHEN: None of what we were attempting to do with the long-form was a given. It required a gear we weren"t even sure we had. It was clear early on that this work was a true blend of a Sprint and a Marathon. It was also clear that there was nowhere to rest, or “hide” during a show.

The character switching was born out of sheer narrative necessity. We made up the “rules” for that as we went along. Sometimes it required us to play each other’s characters as well. Using Joshua [Joshua Raoul Brody] as our musician was important from the start. We needed someone who could stay with us.

"Before our first show, we had absolutely no idea if anyone
would come. The show sold out. It was exhilarating.” Tim Orr


STEPHEN: We took the first publicity shots at the True Fiction Magazine rehearsal space down on Oak Street near Van Ness and Market.

RAFE: I was the photographer for the earliest shots, including the one that eventually became the silhouette in our logo. For that, we put on overcoats and hats and walked toward the camera. I put the camera on a tripod and used the timer. Soon after that, Paige Whitson designed our logo using that silhouette. 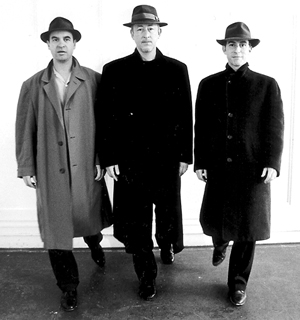 STEPHEN: I think in some of the early shows [at Venue Nine, on 9th Street] we walked around the block and entered from the street in the overcoats and hats, and hung them up on a coat rack onstage. We eventually decided this was a bit much and just walked on without them.

TIM: Yes, we did enter that way. Our mutual friend John Stevenson [director, Kung Fu Panda] loved the opening and was dismayed that we abandoned it. He once told me that opening, and our opening night performance in general, was one of the most exciting performances he’d ever seen. I remember walking around the block with Rafe and Stephen and being scared out of my mind.

I took the lead producing us in our first gigs at Venue Nine. That was the beginning of Paradis Productions, which is now Improv Playhouse of San Francisco. I was teaching at A.C.T.’s Summer Training Congress at the time, and it seemed like the students there might be a good audience. We did a couple of shows for them every year. Those shows gave us a lot of confidence that what we were doing was unique.

RAFE: Glen and Judi Eastman of Eastman Productions began producing 3 FOR ALL in 2001. While they were at SBC (now AT&T), they had worked with Stephen and Tim, who were performing as Movie Mega-Superstars Dirk Manly & Blaine Bustier. 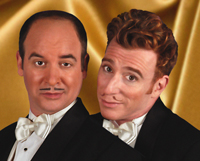 STEPHEN: Tim and I were doing a Dirk & Blaine gig at Disneyland. We were walking down Main Street, USA one morning right after the park opened, drinking coffee. We sat on a bench and Tim suggested we ask Glen and Judi to produce 3 FOR ALL. I remember immediately thinking it wasn't’ a good idea. I thought that Dirk & Blaine were already burdening them in their “retirement” from SBC and to add 3 FOR ALL to that seemed like a bridge too far. I was very, very wrong. They jumped at the chance and have become synonymous with 3 FOR ALL ever since. They are essential to what we do in so many ways.

TIM: It is a tremendous blessing for 3 FOR ALL to have two such talented and hard-working producers as Glen and Judi. When they joined the team it allowed us to reach new heights. 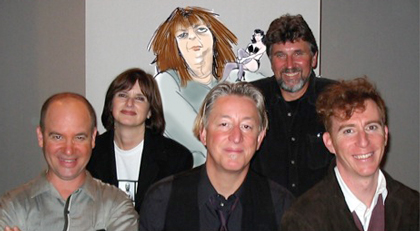 being  “ON A STAGE WITH NO RULES”

“I remember Stephen grabbing me by my tie and throwing me
on stage to replace him, in the middle of a scene,
for no reason.” Tim Orr

TIM: We were discovering things in rehearsal --like character switching-- that we had never seen or done, and were having to process exactly what it was we were doing. And, we played a LOT of “Ball”.

I think that overall, Rafe took the lead in shaping our current format (first half, scene work, second half, long-form). A few years down the road he had the idea to start our first scene immediately upon getting the audience suggestion, which was a brilliant idea and to this day is one of my favorite starts to a show. No introduction or explanation whatsoever, other than “Good Evening” or “Thank You”. 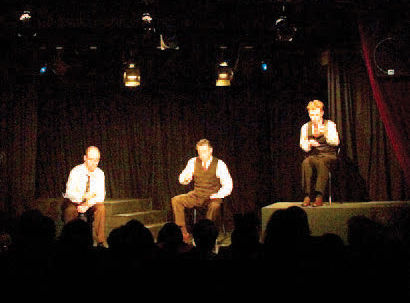 I think that part of our success, both popular and artistic, comes from the fact that our format, being very loosely defined, mirrors the actual act of improvising more than any other.

RAFE: That performance format was figured out at the old TFM space on Oak Street. I believe that doing scenes in the first half was an obvious choice. We’d done extended story long-form with Improv Theater in June of 1989, but never with such a small cast. So the bar is high and the audience can feel the danger.

An early vivid memory is a scene concerning three soldiers talking about the sweethearts they had back home. There was something wrong with each one of the women, but the soldiers loved them. By the time it got to my character, it turned out my girl was dead. The funny thing was that I had met and started dating her after she died.

STEPHEN: That scene is so clear in my memory. It showed me how much more we had to commit at times, otherwise we could completely “lose it” onstage in a way I had never experienced before. Something about being such a small ensemble, coupled with the pace and the feeling that it was okay to mess with each other and be messed with. That has always been an unspoken ethic in 3 FOR ALL…the messing with.

TIM: We also played some games in our shows for a while--an “alphabet scene,” a scene in reverse. My memory is that we did that for maybe a couple of years before going to straight-ahead scene work.

RAFE: I also remember a chase scene in an Arabian type bath, with an amazing space/object environment. 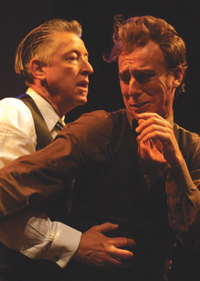 TIM: I think that was one of our first (if not the first) long-forms, called “Turkish Bathhouse.” It was an espionage-type story, and the amazing thing about the environment was that we had a chase scene through the bathhouse, and we were opening and closing individual bath curtains, and somehow were able to re-create the locations of the curtains, even when we didn't see the person behind us, because of the soft sound-effects we were making. I thought, “This is really something.”

STEPHEN: There was a feeling of being set free in some ways…the rules just went out the window. Like grabbing Tim and yanking him onto the stage…that was new. You just didn't do that sort of thing.

TIM: We’re sort of rowdy guys. Our love of playing ball rather than always “working” on things or giving notes, which we rarely do, has somehow made us bond as teammates over the years.

“There was nowhere to hide.  It was intense.
It still is intense.” Stephen Kearin 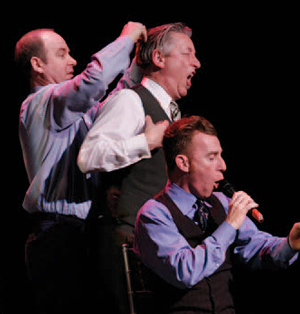 2008  3  FOR ALL with Stella Polaris from Finland | Bayfront Theater, San Francisco 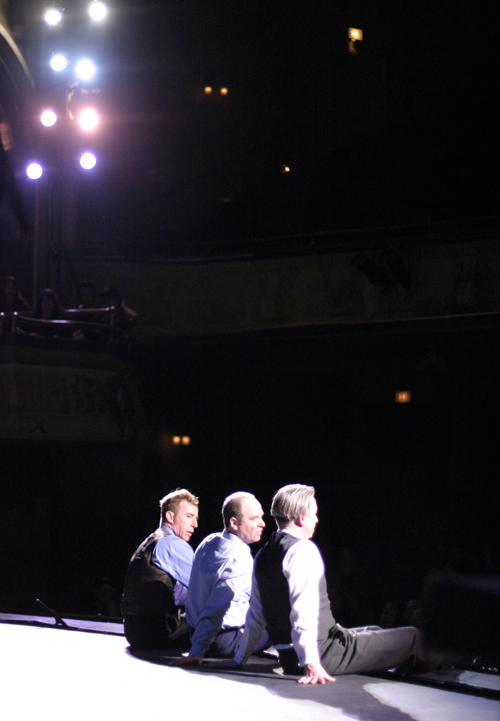 3 FOR ALL which was formed in 1996 by
Rafe Chase, Stephen Kearin and Tim Orr,
is driven by the artistic principle that the work takes place "on a stage with no rules."

In their performances, the improvisers
hit the stage with no script, no preconceptions and without the underlying structure of most improv formats.

The three actors work together, along with musical and lighting improvisers, to tell both short and full-length stories of all genres
which may or may not be related to each other, or based on audience suggestions.

Nothing is rehearsed, nothing discussed before or during the shows, nothing held over or reworked for future shows.